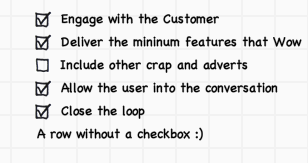 The post's title was the footer from an Amazon Customer Service reply to me. I'm usually afflicted with a jaded view of such statements but this time I actually believe this company can and will achieve their goal.

First: its a bold statement but also humble. Most of the time you get: "The worlds leading...", "The best..." etc etc. But Amazon are saying they a "building" - they are not there but are working on it. They also say I am "helping" them - allowing me to engage with them and giving me recognition.

So all this is very nice and Cluetrain and all that - but only works if the product is good....

Second: I've been using the Kindle Reader on NexusOne for a while to read snippets of books (e.g "do more faster" by Techstars crew - more on that in a later post) when commuting or grabbing a coffee, it did the job and didn't try to do too much. (fit for purpose). However, Kindle drove my emotional justifications for getting the Samsung Tab the day it came available -> my first installed application was the Kindle.

I start Kindle on the Samsung Tab, open "do more faster" and boom, it opens at the page I last read on the Nexus One. Thats a very nice customer experience. The only problem is now I have to compete for the Tab at home (Angry Birds was second installed app thus sealing the Tab's fate as must-have mission-critical domestic tool).

To remedy this injustice: last week whilst in China I purchased a yum-cha Android "iRobot" tablet for $100. I didn't expect much but installed Kindle and boom, it opens at the page I last read on the Tab. I now can pick up reading on the formfactor that suits me.

Moral of the story is that even with a 600MHz 1st/2nd generation Shanzai tablet you can enjoy a great customer experience because Amazon focussed on the few features that really mattered. Second moral is that you can do that without purchasing an Apple*.

Third: No product is ever done - Kindle also syncs comments and highlights. But what I want to do is post or share a highlighted quote to a blog, Buzz, Twitter or an email. More importantly, I think this would help Amazon sell even more books (naturally my post would link to the Amazon page for that book). I used the feedback section of the Kindle and told them so. Unsurprisingly (but often neglected by other companies) they've built in a closed loop mechanism to easily allow me to "help".

That is where the Amazon Customer Service reply came from.

* BTW I saw Android 1.6 tablets a while back in China before the iPad appeared.
Posted by David Jones at 3:41 PM